The Annual Campaign helps make possible thousands of success stories at YMCA Blue Ridge. Thanks to your donations, young adults like Jacqui learn leadership skills.  Teens like Talha are able to find their voice.  And older adults like Ed and Betty get the help they need.

We have an extraordinary opportunity to impact lives for a lifetime, but we must take action today. Your support makes this possible. 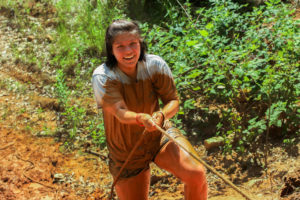 Jacqui first visited Blue Ridge as a Leaders’ School participant after growing up in the Tampa Y after-school programs.  Last summer Jacqui completed the six-year curriculum of Leaders’ School while serving as an adviser to 11 teens from the Bob Sierra Y.

Jacqui has also served on the staff at YMCA Blue Ridge, where she was presented with the chance to be a BOLD & GOLD trip leader.  She was initially terrified.  But then she “felt inspired by the confidence Blue Ridge staff had in me. I did something that I always wanted to but never thought I could.”

As a trip leader, Jacqui lead a group of 8 middle schoolers on a challenging 6-night backpacking trip along the Appalachian Trail.

"I'm so appreciative of the people at Blue Ridge. They've made a huge impact on my life." 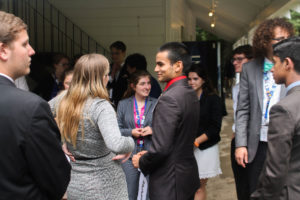 Talha was born in Pakistan but moved to the United States with his family at a young age.  The Y became a welcoming home for Talha when he joined the Kentucky YMCA Youth Association’s Youth in Government program in the 8th grade.  He instantly took to the program as an outlet for his passion for public affairs and debate, eventually becoming his state’s Model UN Secretary General.

However, when Talha first encountered the much larger stage of the YMCA Conference on National Affairs, a gathering of 600 of the brightest teenagers from across the country held each summer at Blue Ridge, he initially lost confidence in himself.  Suddenly surrounded by hundreds of the most intelligent teens he had ever met, Talha’s Y adviser said that he “undersold himself and felt out of his league.  Even as he passed successive rounds of debate, he was filled with anxiety.”

In spite of his self-doubt, Talha climbed the ranks at National Affairs and reached the final round of debate, featuring an audience of more than 700 peers and adults. His proposal focused on the military drone program, which he powerfully humanized by interweaving personal stories from his childhood in Pakistan.

In the words of his adviser, “Talha came to understand his power to break down walls. The national stage of Blue Ridge and being in front of kids he didn’t know helped Talha gain confidence in his voice and come to understand his own potential for changing perceptions.” 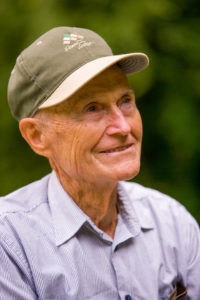 Here at Blue Ridge, older adults have a chance to keep active and grow in spirit, mind and body.  Whether through cultural programs, on-campus programming, or sight-seeing tours, we are proud to play an active role in enriching the lives of seniors.

A group of seniors from the Spears YMCA in Greensboro visited for the Appalachian Christmas tour, which included craft-making, live music, and the Biltmore Estate’s famed candlelight ceremony.

“Our seniors want to travel,” said Lynn Crawford, Membership Director at the Spears YMCA.  “They want to see places like the Biltmore, but they also want the connection, the community, and the social aspect that comes from a trip like this. “

During the trip, the group stayed up well past midnight talking and telling stories in the newly-renovated Blue Ridge Center lobby.

"For them, a huge part of the trip was about building community," Lynn shared.

Clyde's Story - This Is Us

Over the years Clyde began bringing his entire extended family to Blue Ridge, which now includes several sets of grandchildren. Many of his family’s fondest memories are their summers at Blue Ridge. With all the moving that comes with coaching in the professional ranks, Clyde says Blue Ridge became like the “hometown they never had”.

For Clyde, Blue Ridge has always been that place where he’s able to refocus on his priorities as a husband and father and develop relationships with others similarly committed to walking with Christ. Above all, Clyde comes to the Mountain to listen to God speak to him.

While Blue Ridge has become a truly special place to Clyde and his family, he says the greatest impact he’s seen over the years is the thousands of teens who’ve given their lives to Christ on the Mountain.

This is where the true beauty of Clyde’s story lies: thinking of all those boys who came to Blue Ridge with “hardened hearts” but left with a commitment to Christ. The good they’ve done and the positivity they’ve spread because of their experience on the Mountain.

Micah’s story begins as a wide-eyed teenager from Houston, TX, coming to Blue Ridge for the first time as a delegate at the YMCA Youth Conference on National Affairs.  Micah says he found a place where he belonged, inhabited by other young people who shared his passion for making a difference in the world.

Micah fell in love with Blue Ridge, and continued to return for CONA, as the annual youth conference is known, each summer during his high school years. From the debate format of the experience, Micah honed his public speaking skills, found the confidence to stand up for his values, and learned about the responsibilities of being an engaged citizen.

On a deeper level, through the life-long relationships Micah forged at CONA, he discovered the true meaning of friendship, trust, and service to others. He also came to understand how people from different backgrounds and with different beliefs could bridge that seeming divide through mutual respect.

Living in a divisive age oftentimes marred by political screaming matches and a lack of civility, Micah sees Blue Ridge as a place where young people can change for the better the way we interact with each other and find unity in our shared values.

These experiences prepared Micah well for what followed in his life: after completing his Master’s Degree from the University of Delaware, Micah was commissioned as a 2nd Lieutenant in the US Army where he’s currently serving as a prestigious Schwartzman Scholar (the Chinese equivalent of the Rhodes Scholar program) in Beijing, China at Tsinghua University. Having studied Chinese since this freshman year of college and fluent in the language, Micah is building on the leadership lessons and relationship-building he first embarked on at YMCA Blue Ridge.

In between his academic studies and service in the armed forces, Micah also found the time to found his own non-profit. Through Reviresco, Micah seeks to “bridge the civilian-military divide by engaging, educating, and empowering society to go beyond saying, ‘Thank you for your service.’” In support of that work, Micah and a team of cadets ran more than 1,400 miles from New York City to Miami, FL this summer to raise funds and awareness for the cause.