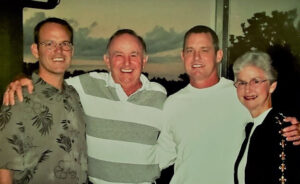 Though it spanned over half a century, it was a special moment in time. The moment began in 1961 when “Mr. Phil” arrived in New Orleans to become the New Orleans Lee Circle YMCA Assistant Physical Director with his wife “Mrs. Gail,” who was pregnant with Eddie, and their son Phil III.

That summer program was the seed that blossomed into a series of events that altered the lives of “Mr. Phil,” his family and hundreds of those youth and adults that were caught in the mystique of a variety of experiences. Perhaps most important was fostering the development and growth of the Lee Circle Leaders’ Club which was considered one of the most prominent Leaders’ Club programs in the nation.

“Mr. Phil” was intimately involved in the core leadership of Blue Ridge Leaders’ School for over 50 years. He wrote most all of the school’s curriculum, authored the Leaders’ Club Development and Training Guide, provided the leadership of multiple program offerings and served as the Director of the Sr. Division.

When their sons Phil and Eddie turned 4 and 3 years of age, “Mrs. Gail” became involved at BRLS teaching exercise classes, publishing the daily newspaper, and assisting with nurse duties. Both Phil and Eddie became BRLS Leader participants and as adults served on the BRLS staff. At one point, the contingent from New Orleans numbered over 100 participants and staff for the one week school.

“Mr. Phil,” “Mrs. Gail,” Phil and Eddie shared their lives and family with those involved in the Y programs. It grew to become an extended family with some actually living with them during troubled times. Many remain “Mr. Phil’s” and “Mrs. Gail’s” closest friends today.

In concert with the Leaders’ Club’s mantra, programs ranging from gymnastics to judo provided youth from all walks of life the opportunities to achieve life changing goals including college scholarships. Many became Y policy volunteers and Y career professionals. It is that achievement that is the ultimate measurement of “Mr. Phil’s” career.

We will honor “Mr. Phil’s” and “Mrs. Gail’s” contributions to Blue Ridge Leaders’ School by naming a room at YMCA Blue Ridge Assembly in their honor - the Legends of New Orleans room.

Help us honor the Legacies of these New Orleans icons by contributing to our $50,000 goal to name the room!

There are two different ways you can contribute to the Legends of New Orleans room.

On the following page, you will be able to either log in to a PayPal account OR pay directly with a credit or debit card.