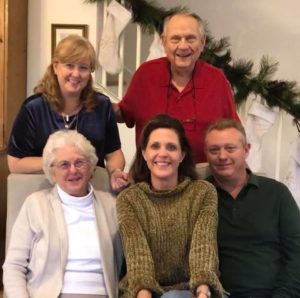 Do you believe in coincidence or divine providence? Boots recalls his first experience with Blue Ridge Leaders’ School in 1958. After taking a year off from LSU, Boots worked full time for the New Orleans YMCA as Assistant Youth Director. That summer his boss sent him to something called Blue Ridge Leaders’ School. There, he found direction. The day after graduating from LSU, Boots was drafted into the US Army and sent to Fort Gordon in Augusta, Georgia, and later was permanently assigned to Fort Gordon. Although hard to believe, Boots’ Army assignment was for Community Service and he worked full-time for Colguit Clark at the Augusta YMCA who was also the Director of Leaders’ School.

After his discharge, Boots took a position in the Jefferson Parish School System and waited for a Y position to become available. In June 1965 he became Youth Director at the Lee Circle YMCA. Two years later, Boots was named Executive Director of the newly founded West Bank Y. There, he started his first Leaders’ Club. The New Orleans Y (Lee Circle) already had what was considered the most prominent Leaders Club in the US. With the help of Phil Wortman, The West Bank Y Leaders’ Club was born, and thrived. And because of the Leaders’ Club, the West Bank Y thrived and continues to expand today.

Many of Boots’ relationships formed through the Leaders Club also thrive today. These then young people remain an important part of his life. The more than thirty years Boots spent as both paid professional and volunteer at Leaders’ School were some of the most important in his life. Being able to share most of that experience with his wife, Erna, made it even more valuable. Erna served as the school nurse for years. Boots truly believes that the values they shared at the YMCA and Leaders’ School has been a guide for their life to this day.

Boots and Erna have impacted the lives of countless Leaders and staff over the years. This effort to name a room at YMCA Blue Ridge Assembly in their honor will be a small token of appreciation for a lifetime of work with Leaders from New Orleans and around the Southeast.

We will honor Boots and Erna's contributions to Blue Ridge Leaders’ School by naming a room at YMCA Blue Ridge Assembly in their honor - the Legends of New Orleans room.

Help us honor the Legacies of these New Orleans icons by contributing to our $50,000 goal to name the room!

There are two different ways you can contribute to the Legends of New Orleans room.

On the following page, you will be able to either log in to a PayPal account OR pay directly with a credit or debit card.